We’ve now seen 2 consecutive rate cuts from the RBA over the last 2 months, which it is hoped will help boost the slowing economy, reduce unemployment and help the property market recovery. The government responds with a drop in deeming rates....find out more here.

It’s mid-July and it’s been an eventful start to the new financial year….

We’ve now seen 2 consecutive rate cuts from the RBA over the last 2 months, which it is hoped will help boost the slowing economy, reduce unemployment and help the property market recovery. Of course, it’s good news for those with variable home loans, with the big banks cutting between 0.40 and 0.44% off their variable rates in response to the RBA rate cuts.  Not so good news if you’re relying on cash interest and term deposits for your investment earnings, as the offered rates continue to come down.

The RBA cash rate is now at a record low of 1%, and the question is…are there going to be further cuts?

Some economist are certainly leaning that way, but the RBA will have to assess the effectiveness of these recent cuts before deciding on their next move.

With the recent cuts in the cash interest rate,  the government has been under increasing pressure to adjust their deeming rate.

Firstly, let’s recap what “deeming rates” are and how they’re used.  Deeming is used by the government (or Centrelink) to assess your Age Pension entitlement, as well as some other social security benefits, under the income test.  In basic terms, instead of pensioners having to report their investment income on their cash savings, share investments, superannuation etc, all such financial assets are “deemed” to earn a given return as set by the Deeming Rates. 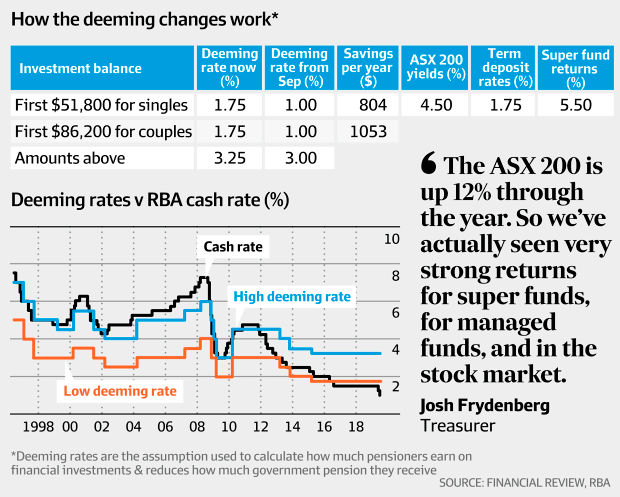 The Deeming Rates have stayed the same since 2015, whilst we’ve seen 5 interest rate cuts since that time.  In response, the ever-increasing argument in the media has been that deemed income exceeded the realistic return on pensioners investments, commonly considered to be term deposit rates.  However, pensioners of course have the option of investing in other assets such as shares, managed funds, listed property funds etc which tend to outperform the deeming rates by some margin.

The idea portrayed by the media that pensioners can only invest in “safe” investments such as term deposits, because they can’t risk their retirement savings is a somewhat traditional, simplistic, and I would say uneducated perspective.  If anything, it highlights the need for pensioners to get sound financial advice.  With life expectancy ever increasing, you could just as easily argue that pensioners need to make their savings work as hard as possible, to ensure their savings last as long as possible. So it’s about striking the balance between a comfortable level of investment risk and achieving a desired return.

Nevertheless, the government announced last Sunday that they will reduce the deeming rate, as shown in the table above. The lower rate will reduce from 1.75% to 1%, and the upper rate from 3.25% to 3.00%.  This means single pensioners could receive up to an extra $804, and a couple up to an extra $1,053 per year.

In reality, only about a quarter of age pensioners will see an increase in their payments as a result of this change.  Those whose payment are determined under the asset test will not be affected. Similarly, those who are already getting the full age pension will not be affected by the change in deeming rates.

The change in rates will come into effect in September and be back dated to 1 July 2019.